Mildlife, which opened for King Gizzard & the Lizard Wizard, brought its distinct blend of fuzzy melodies to the Arlington stage. The tracks ranged from disco, jazz and funk influenced tunes. The band performed as attendees slowly entered, mesmerized by the sights and sound of the band performing on stage. Listening to the band, I was struck by the intense, unyielding interplay between bassist Tom Shanahan and drummer Jim Rindfleish, which maintained a solid rhythmic foundation. This allowed guitarist Adam Halliwell and synthesizer and vocalist Kevin McDowell to experiment with more sublime sounds and melodies. Towards the end of their set, you could visibly see audience members listening to the band’s music, as several people got up and danced to the music. 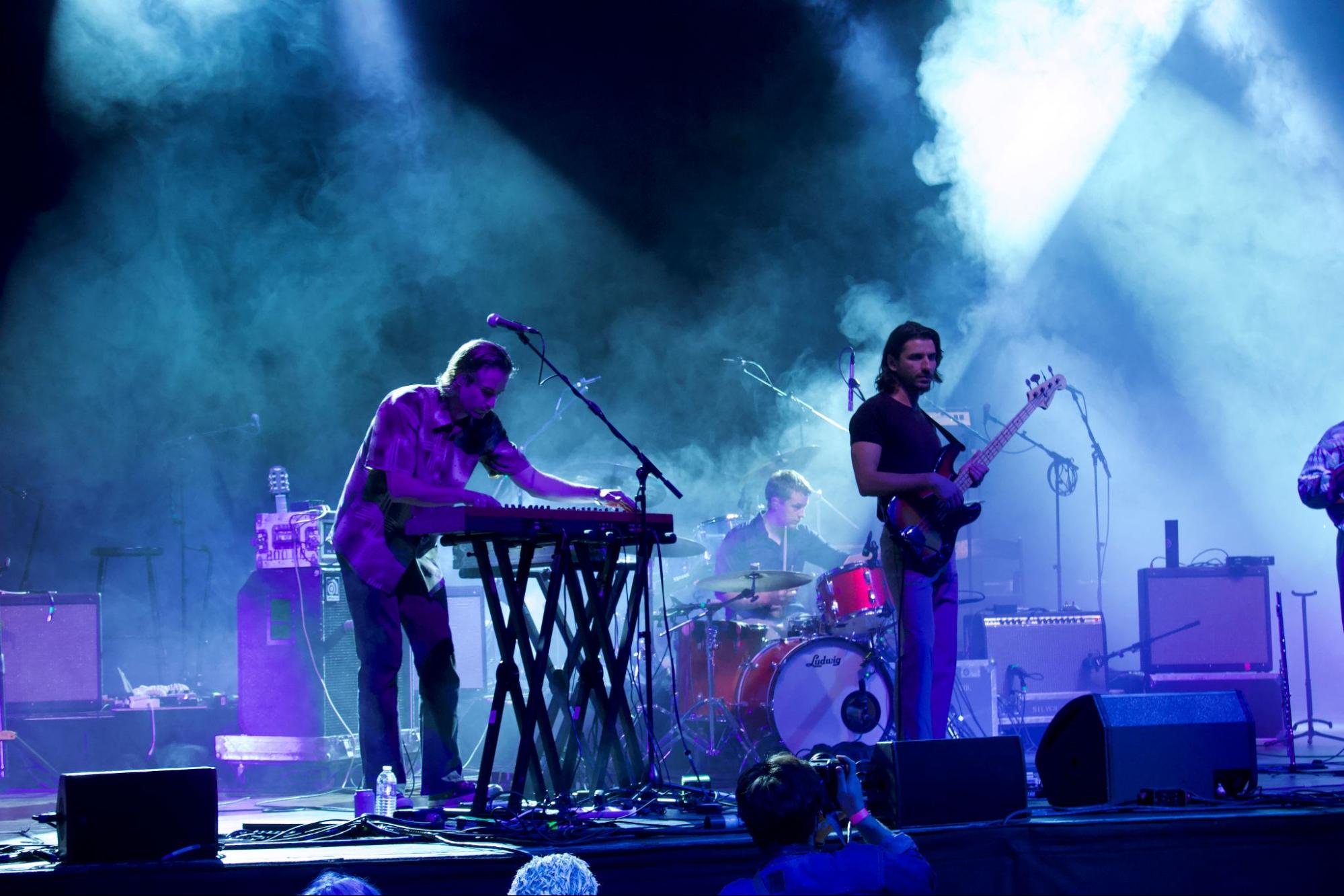 Before the show, King Gizzard & the Lizard Wizard announced on their Instagram that they would be playing an all-acoustic set. On stage, stagehands could be seen pulling out several acoustic guitars, and there was even a grand piano next to it. The band walked out to thunderous applause, and audience members immediately came out from under their seats to their feet. The band opened the set with “The River” from their 2015 album “Quarters!” Without taking a break, the band immediately jumped to the songs “Sleepwalker” and “It’s Got Old”. All the while, the band had animated stage graphics on a screen behind them, projecting clips from “The River” music video directed by the band’s longtime illustrator and collaborator Jason Galea. After the opening three songs, guitarist Joey Walker noted that this acoustic set was the first they’ve played outside of Australia, joking, “Which basically makes this our first acoustic set.” Then the band played “Muddy Water” on 2017’s “Gumboot Soup.” At that moment, I noticed that no one in the audience was in their place. In fact, several attendees crowded the aisle trying to get a better view of the group.

After finishing the song, Walker asked the audience, “How’s the acoustic sound?” To which the crowd responded with cheers. Vocalist and guitarist Stu Mackenzie went on to mention that the set was “dedicated to our audio pals who made this possible”. Mackenzie then recounted the band’s decision to play an acoustic set in Santa Barbara after their show at the Fox Theater in Pomona the night before. This left their audio team scrambling to find a piano for the show. 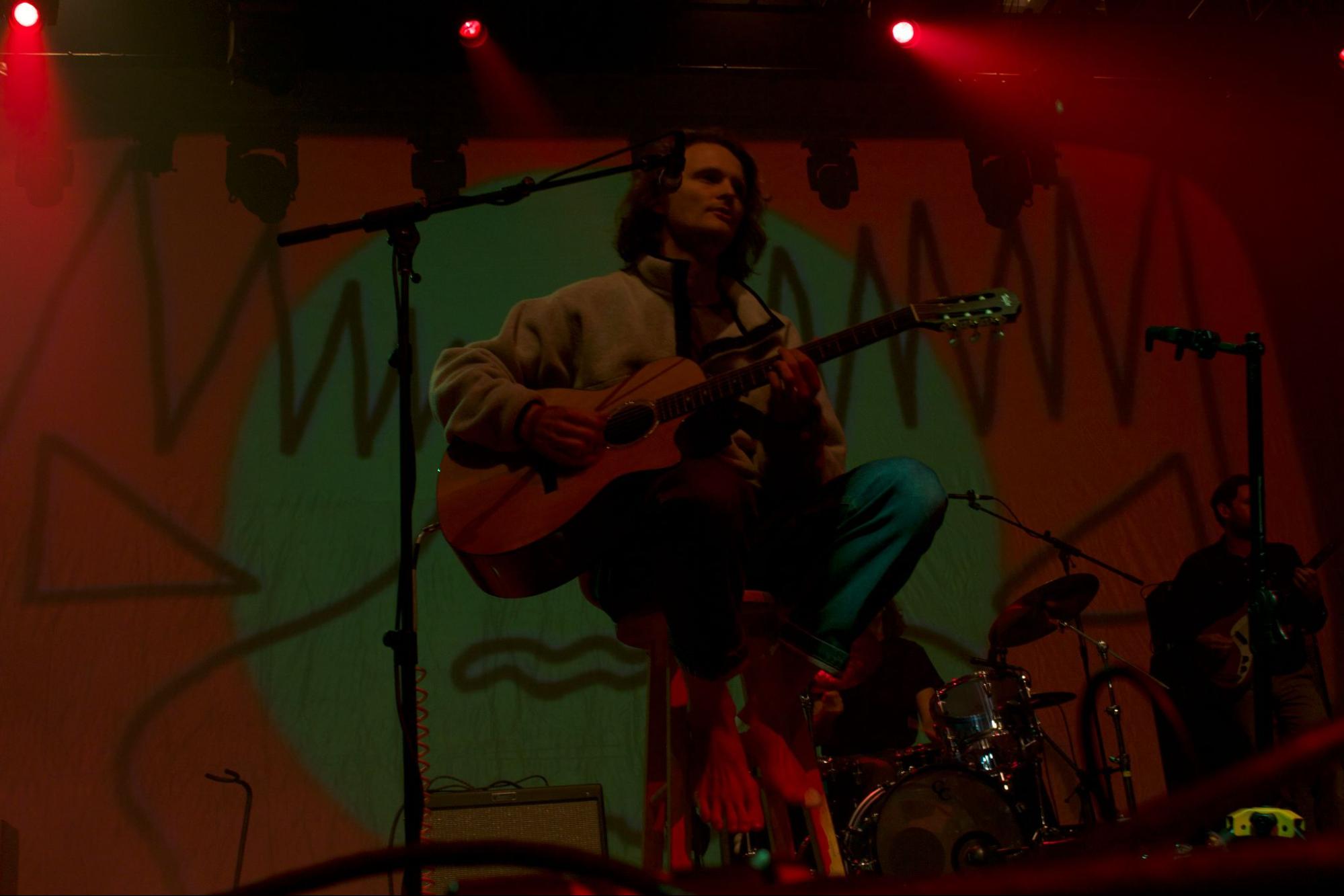 During the set, the band played one of my favorite King Gizzard & the Lizard Wizard songs, acoustically for the first time, “Mr. Beat” from 2016’s “Nonagon Infinity.” The acoustic rendition of the song maintained the dynamic energy of the album version, while giving it a relaxed and intimate feel. After the song, the group jokingly interacted with the crowd. During this interaction, Mackenzie asked, “Are there any Heavy Metal fans here?”, which was met with applause. Then Walker added to the line of questions “Any John Mayer fans?”, which was met with loud boos. Eventually, as if following some sort of Cartesian line of thought, Walker said, “What is music?”

As if the band’s extensive repertoire wasn’t more impressive, they played a song from their upcoming album, “Blame It on the Weather.” As the band played the new track, images were projected in the background of what can only be described as apocalyptic visions of the weather, if you were to drop acid just before looking up at the sky as the world was ending. At the end of the song, one of the members asked, “Are any of you going to Coachella?” Some people in the audience applauded. The band are set to play both weekends of the iconic music festival. Someone in the group replied, “See you at the ‘chella.” The seventh song of the set was “The Bitter Boogie” which saw the band reach Grateful Dead levels of extended jamming. During the song, the band engaged in a bit of call-and-response, chanting the word “bitter” over and over, as Walker took a solo. Mackenzie walked over to each member of the group and offered them a mystery drink from a bottle. During the band’s performance of the songs “Dirt” and “Hot Water”, they were joined by Halliwell of Mildlife, of whom Mackenzie noted, “We know…our whole life.” Halliwell played the flute to the tunes. He wasn’t the only member of Mildlife to join the group for their performance.

On the last two songs of the night, Rindfleish joined the band on stage playing drums alongside King Gizzard & the Lizard Wizard drummer Michael Cavanagh. Once again the band descended into extended jams. At the end of the band’s performance, Mackenzie waved goodbye to the audience, and several attendees returned the gesture. As he left the stage, he stopped at the edge of the stage, grabbed the setlist and started folding it into a paper airplane. As the band continued to play, Mackenzie approached the microphone and expressed his thanks to the audience. The performance was over, but the crowd wanted more, cheering an encore. Unfortunately, for me and everyone else in attendance, there was no more King Gizzard & the Lizard Wizard in Santa Barbara that night.